Combining Drumset with Hand Percussion to Create a Bigger Beat

The 2in1 Drummer is a fun, challenging collaboration between Cuban drumming legend Walfredo Reyes, Sr., Elliot Fine, co-author of the extraordinarily influential drumset method 4-Way Coordination, David Stanoch, and Mark Powers. By combining standard drumset rhythms with established percussion rhythms for a single player, this inspiring book/DVD study will teach you how to create a “bigger beat” in a wide variety of popular musical styles. Hence, The 2-in-1 Drummer! 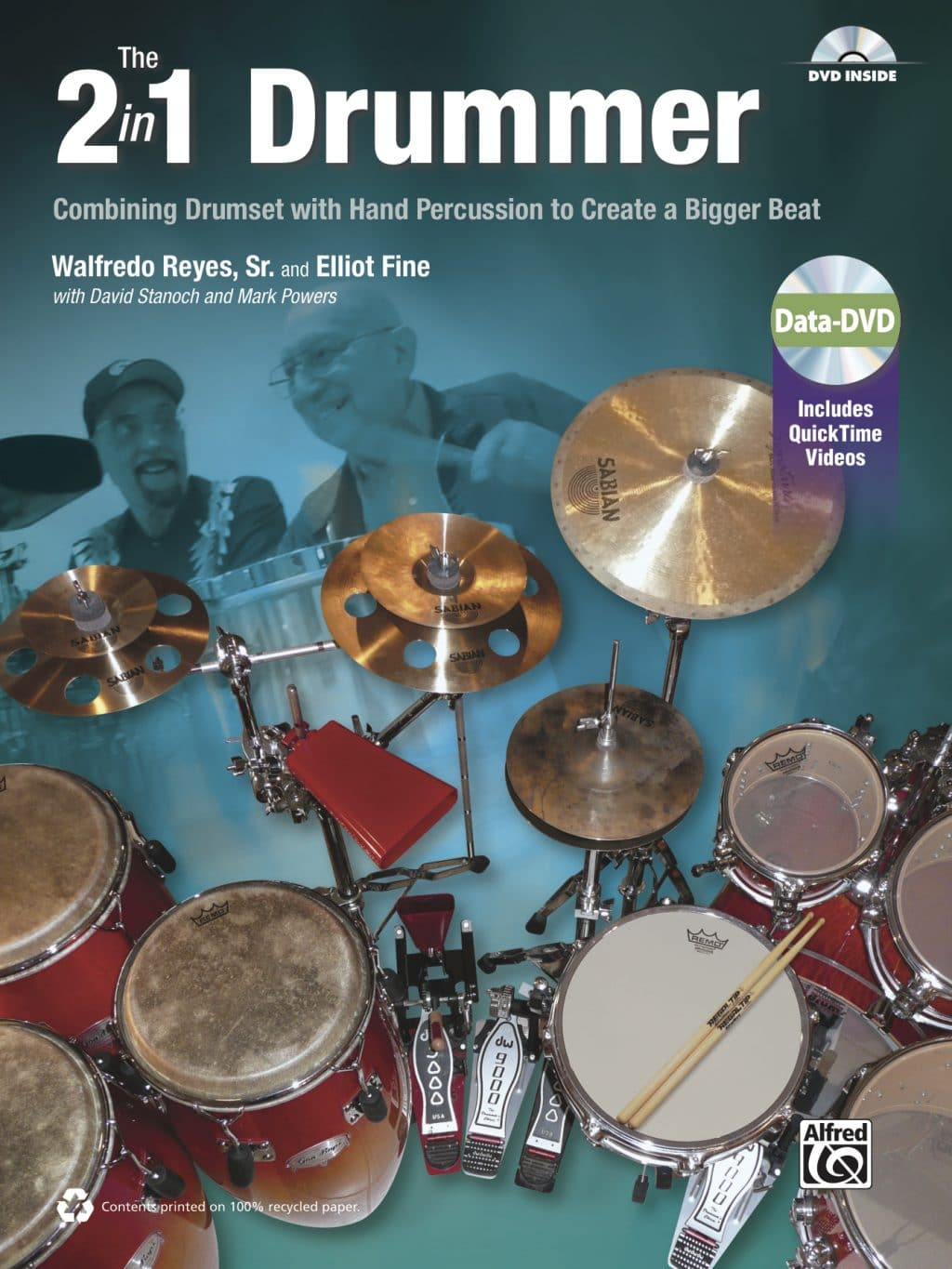 The 2in1 Drummer Book/DVD method, released in November 2013 was the culmination of a collaborative project in the works for many years previously between Minnesota Orchestra percussionist Elliot Fine, co-author (with Marvin Dahlgren) of the classic drumset method book 4-Way Coordination, and Cuban drumming and percussion legend Walfredo Reyes, Sr.

Walfredo and Elliot were longtime friends and mutual admirers of each other’s work. Walfredo had studied out of 4-Way Coordination when the book was first released in the early 1960s and credits the book with opening his mind to develop the coordination to apply his ideas of combining drumset and hand percussion into the hands and feet of a single player in much the same way the bass drum pedal made it possible for one jazz drummer to execute what two brass band drummers had normally played prior to that innovation. Elliot described Walfredo as, “the type of player Marv and I were looking for,” who was already playing in the then futuristic style laid out in their book.

The 2in1 Drummer was designed to showcase Walfredo’s drumming innovations, supported by Elliot’s prolific knack for creating many options out of a single idea, and to give today’s players an introduction into how to creatively and effectively apply its advanced yet practical approach to contemporary musical styles. “Not just Cuban Music,” Walfredo emphasized, “but funk and jazz and rock… Brazilian…anything!”

My role in this production was to help my teacher, Elliot, and my admirable friend, Walfredo, seal the deal and get the project to the finish line after Dom Famularo recommended they take advantage of my writing and editing skills thanks to the success of my own book, Mastering the Tables of Time. As such, I also recommended my friend and former student, Mark Powers, who had also helped me greatly with the layout of my book and could help us see ideas for layout and art direction in real time.

The resulting final project was a labor of love for all involved with credit also due to Dave Black, vice president of Alfred Music Publishing, who green-lighted our production for publication. It is worth noting that Elliot and Marvin Dahlgren’s most popular books, 4-Way Coordination and Accent on Accents, Volumes 1 & 2, are also published by Alfred. Credit must also be given to Drum Workshop founder, Don Lombardi, who gave us the use of his Drum Channel studios to film the DVD that accompanies the book with Walfredo beautifully demonstrating many of the examples.

Our dear friend Elliot, unfortunately, passed away in 2012 before the book’s release but he was excitedly happy with the rough draft, which was complete by then. Walfredo, Mark and I dedicated our 2013 clinic – celebrating the release of the book at the Percussive Art Society International Convention – to Elliot. I was honored and proud to assist in producing such a forward-thinking study in artistry that will stand as another milestone in the legacy of two great drummers and human beings, Elliot and Walfredo.

Elliot Fine was my teacher from age 10 forward. He taught not only drumming, but also how to carry one’s self with humor, compassion and self-confidence. He was, to me and so many others, a mentor and a friend. He opened so many doors for me in my career and predicted things for me that I never believed possible until I saw them come true. We all miss Elliot and love him dearly.

“Elliot started playing drums at age 11, and his career ran the gamut from drum corps, burlesque, Dixieland, show band, big band, small group jazz, and pop, to 41 years with the Minnesota Orchestra and even occasional forays into free improvisation … Elliot Fine was a drummer’s drummer.” ~

A Remembrance produced for Alfred Music by Jonni Murphy

Highlights from the "2in1" Experience